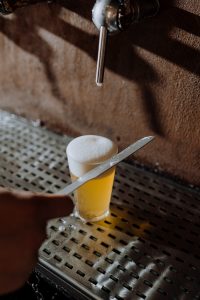 There’s a commercial on YouTube that shows a woman running, sweating and doing her best to burn calories. She comes to the end of the run and is greeted by a friend who offers her a beer. The commercial ends with the runner and friend enjoying the drink. That commercial infuriates me, because drinking alcohol cause weight gain, whether it’s beer or other types of alcoholic beverage.

Alcohol has many negative side effects.

Just like everything else, the occasional alcoholic beverage isn’t lethal. In fact, some types of alcohol can even have benefits. Some studies show that taken in moderation, it can improve immune functioning, provide heart healthy benefits and lower your risk of dementia. However, when used frequently or in excess, it can increase the risk of liver disease, diminish mental and physical performance and increase the risk of diabetes. It also is empty calories, in most cases and interferes with the fat burning process.

The calories from alcohol are burnt first.

When you combine alcohol with food, you’re more likely to store fat. The calories from alcohol are burned first and the calories from food is stored as fat. It also lowers testosterone levels and slows metabolism. If you’re female and past menopause, it’s even worse. It causes fat to build on the midsection. It’s visceral fat that crowds organs and causes health issues. It’s due to an increase of an enzyme called Aldh1a1, which is otherwise blocked by estrogen.

You’ll feel hungrier when you drink alcohol and be less active.

That’s a really bad combination if you’re trying to lose a few pounds. There are numerous studies showing alcohol increases hunger, but more recent animal studies show why it might happen. A study with mice indicated that when alcohol is consumed, it may flick a switch in the brain to put it into starvation mode. High levels of alcohol or continuous consumption increase cortisol levels, which lowers testosterone and causes fat to store around the belly.