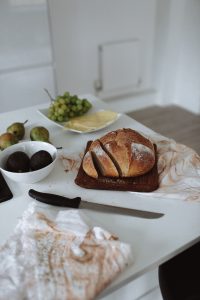 At one time, all bread that was leavened was sourdough bread, which took a long time. In fact, the fact that the Jews had unleavened bread during the exodus from Egypt, may have been because they didn’t have the time to wait overnight for it to rise. These breads were made via natural fermentation of the grain. While it took a long time to rise, and required a starter, bread was extremely popular. About 150 years ago, baker’s yeast was introduced and it made the process less time-consuming and easier.

Sourdough bread is made by a fermentation process with less than predictable flavor.

Yeast bread, that’s the most prominent today, is far more predictable and faster. When you use a sour dough starter, it can vary from location to location. You can make your own starter by putting 2 TBSP of flour and 2 TBSP of unchlorinated water in a jar and make a thoroughly mixed paste. Scrape down the sides to avoid mold and cover it with a paper towel with a rubber band to secure it. Keep it in a warm place out of sunlight for 24 hours. Remove the paper towel, then remove 1 TBSP of it that you throw away. It grows fast and if you don’t remove some, by the end of a week you’d have a gallon of starter. Add 4 teaspoons of flour and a TBSP of water to feed it. Mix and cover. Repeat every day from 5 days to 14 days. As you can tell, it takes a lot of work and time.

A sourdough starter has a variety of bacteria and wild yeast.

The sourdough starter comes from the beneficial bacteria and wild yeas. For instance, lactobacilli feeds on the flour and changes it to lactic acid and carbon dioxide. Flour contains many of the different strains of beneficial microbes, as does the water you start it with. The bacteria break down the starch in the flour and change them into glucose and maltose, which the yeast metabolizes. When the yeast consumes maltose from fermentation, it produces carbon dioxide bubbles that cause it to rise or leaven.

Sour dough isn’t gluten-free, but it does contain less gluten than regular bread.

It’s all about that long fermentation process that makes a difference. It tends to degrade the gluten a bit each day. Gluten is a protein and while not bad, you can become gluten intolerant, causing health issues. You can make sourdough bread gluten free by starting with brown rice flour or other types of gluten free flour. It also will taste quite different from the sourdough bread made from wheat.