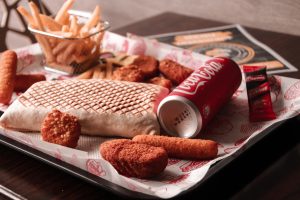 Are foods that are highly processed really foods?

There are meats made in the lab and sugar that’s subject to several processes that don’t normally occur in nature. The sugar is called high fructose corn syrup—HFCS. HFCS starts with corn that’s changed to corn starch. It’s then changed by introducing enzymes produced by bacteria. That substance is changed by adding enzymes from fungus and finally, it’s given another dose of bacteria enzyme from a different bacterium resulting in a sweet substance that’s 53% fructose and 47% glucose. It’s hard to digest, since glucose is metabolized by all cells, but fructose metabolizes only in the liver. That can lead to non-alcoholic fatty liver disease, which is on the rise in both adults and children, affecting approximately 7 million. Animal studies show HFCS also linked to brain damage and weight gain.

Foods that used to spoil no longer do or take far longer.

Spoilage is a natural occurrence. Honey is one of the few natural substances that doesn’t break down or spoil, as long as it’s kept sealed to prevent moisture. For other foods, bacteria or fungi break down organic substances to their organic bases. Attaining a longer shelf life is important, since food is no longer a field to table process. To ensure the products remain edible and safe, chemicals are added as preservatives. Eating small amounts isn’t a problem, but if your diet is primarily processed food, it can lead to high blood pressure, obesity, heart disease and/or cancer.

For some foods, just cooking them can eliminate many nutrients. In tomatoes, it can destroy the vitamin C, but it also boosts the lycopene, a powerful antioxidant. So, in that case, processing has a plus. That’s not true of all processing. Highly processed flour has the bran and germ removed, leaving only the starchy endosperm. The bran is high in fiber and the germ rich in nutrients, leaving processed flour nothing but a bleached starchy substance with few nutrients.