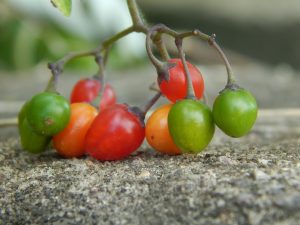 What are nightshades? This family of plants include a number of herbs, fruits and vegetables we often eat, but also some deadly members, like Belladonna, also known as the devil’s cherries. Are they good for us or unhealthy? There’s a belief that many cause inflammation. In fact, tomatoes were once considered poisonous. People did get sick and die when they ate them. However, it wasn’t the tomato that was the problem. It was the tin alloy dishes used for food storage that had high amounts of lead. The acid in the tomatoes caused the lead to leak into the food, causing lead poisoning. Is inflammation just another bad rap for members of the nightshade family?

What plants are nightshade plants.

You might be surprised at the food that’s in the nightshade family. In fact, you might eat at least one of them every day. It contains peppers, tomatoes, potatoes, tomatillos, goji berries, gooseberries, garden huckleberries and eggplant, just to name a few. The fruit some plants, like the tomato, and the root of others, like the potato are used. Most other parts of the plant contain toxins. Another member of the nightshade family is tobacco.

Like many plant species, members of the nightshade family have their own pesticides.

Members of the nightshade family contain solanine, which are alkaloids and natural pesticides. When consumed in large concentrations, it can cause digestive issues, such as nausea and diarrhea, but the amount in the produce eaten is normally too small to create a problem. You’ll find it more concentrated in leaves and stems, but the fruits, when green also have higher concentrations. Members of the nightshade family also contain lectins, which are also in legumes and grains. These can cause inflammation, especially when combined with solanine.

Should you avoid nightshades entirely or are they safe to eat?

For most people, the small amount of solanine isn’t a problem and even the lectins might not be. The problem is, for some folks they do create an inflammation. Both solanine and lectins are considered anti-nutrients. That means they interfere with the body’s ability to digest food. That can create two problems. The first is the reduction of nutrition available to the body. The second is the potential to interfere with the microbiome of the digestive tract. Feeding microorganisms makes them grow. Eating plants with lectins that interfere with digestion cause bacteria to grow linked with inflammation.