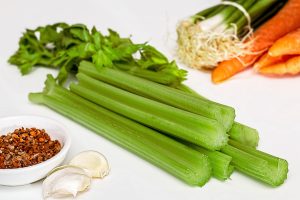 There’s a lot of misinformation on the internet, especially about dieting and the best type of food to eat. You might have heard about food that contains negative calories, so the more you eat, the more weight you lose. Is that a fantasy or a reality? Let’s start with the facts. Food has to be digested and to do that, it requires energy. In fact, digestion requires about 10% of the calories you consume. Foods high in fiber, such as celery, use approximately 20% of the calories they contain for digestion. Proteins are used the most at 30% and fats just require 3%.

Celery is not only high in fiber, but also in water, as well. Digestion may actually cause the body to burn far more calories than celery contains. A rib of celery has between 6 and 7 calories. While it might not be a negative calorie count, it’s close, and celery has one more feature that can cause quick weight loss. It’s a natural diuretic, so you’ll lose water weight when you eat a lot. The fiber fills you up and keeps you feeling fuller longer.

Celery may actually be a negative calorie food.

Food that is low in calories and high in water and fiber may actually burn more calories than they contain. Celery fits that description. With so few calories and so much fiber, it’s something to consider, but there’s no scientific proof that celery has negative calories. One thing is certain, it helps you lose weight, plus celery juice is a natural diuretic if you have water weight.

Celery may be king of negative and super low calorie foods, but it’s a close race.

Fibrous fruits and vegetables are naturally low in calories, plus those numbers are lowered by the calories it takes for digestion. Another tough competitor in the race to negative calories is watermelon. Watermelon is not only loaded with fiber, but also primarily liquid. In fact, it’s 92% water. Thermogenesis—the calories used to digest the food—-takes a big bite out of the minimal calories it already contains. It’s also a diuretic. Leafy greens are another almost negative-calorie food.

Add more flavor to your meals can also reduce your calorie count.

Adding herbs and spices adds nutrition to food, but also has nutrients and several other health benefits. For instance, cinnamon is a true negative calorie food. It boosts metabolism and uses more calories to process than it contains. However, a half teaspoon is just three calories and quite a lot to season any single serving. The fiber makes it more thermogenic. It also reduces blood sugar levels and increases insulin sensitivity.